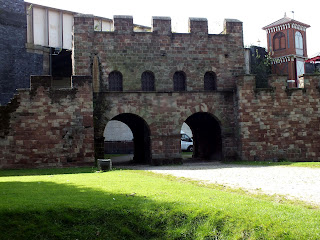 There is very little in Manchester of a Classical nature since it is in most respects a very modern city. The whole city seems to be made of brick and feels very industrial Victorian. However there is the very nicely reconstructed Roman fort of Mamucium located in Castlefield, one of the nicer areas in the south-west part of town. 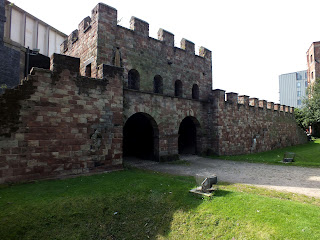 The front gates have been rebuilt on top of the original ruins but they're not connected to anything. The walls on either side are only a couple dozen feet long. The upper floor isn't accessible, or at least it wasn't when I went there. There's nothing behind the gates either. Just a bridge passing over the road. 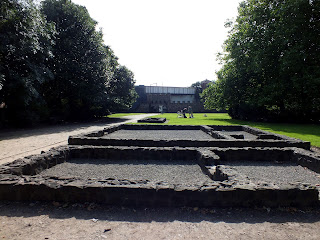 In front of the gate is a section of the vicus (town) that grew up outside the fort. This was probably a lot bigger than it seems now. The area around the fort is very built up and undoubtedly destroyed much of the original settlements. These houses would have been owned by soldier's families or other people connected with the administration of the fort. These villages are common next to forts, particularly in Britain. 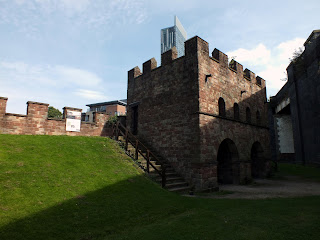 The rear of the gate has stairs on either side leading to doors in the side which unfortunately seem to always be locked. You can't get to the roof which is bare in any event. The area within the fort is mostly occupied by a large tram bridge. There are only two surviving sections of the fort remaining. 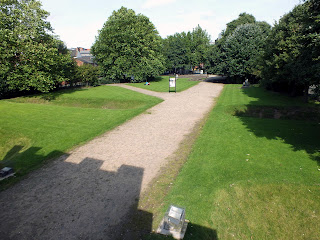 From the battlements you can overlook the park which is quite nice and usually has people in it as long as the weather is nice. The defensive ditches have been recreated on either side of the path. These would have been filled with spikes to kill anyone unfortunate enough to fall in. At the end of the path is the Museum of Science and Industry, a rather more traditionally Mancunian focus. 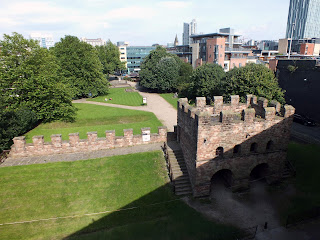 What's nice about Mamucium is that it is not a typical Early Roman building. The fortification is a recreation of how it would have looked in the 3rd or 4th Century AD. Seeing as how most surviving buildings are from an earlier period it is an excellent look at what Later Roman defensive architecture was like. 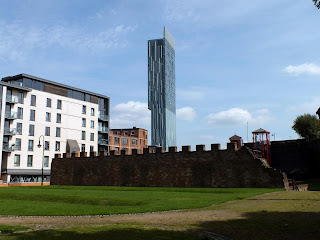 There is another section of wall to the west. Like the gate this section has been restored to how it would have appeared in Roman times. There's another park here but it isn't as big as the other one. Given these two as a guide it is possible to get an idea of the scale of the fort when it was complete. It wasn't very big, certainly not when compared with the size of Manchester now. Hardly surprising given that it was a fort and not a city. 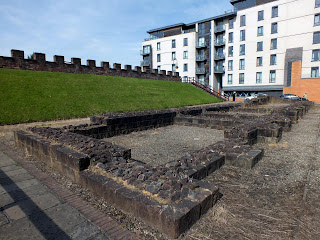 Behind this section of wall is the granary. Part of this seems to be reconstructed too, although only to about a foot off the ground.This was the most important part of the fort since it provided food for all of the soldiers and would be vital if any military operations were being carried out nearby. 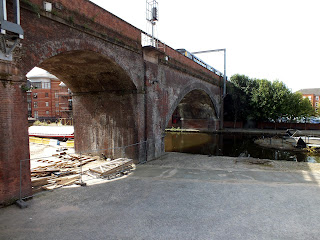 On the other side of the wall is a dock. I gather that the river ran near here in Roman times or else there'd have been no reason to build a fort here. This section is nice and seems to be something of a romantic hangout.

Ozymandias
I met a traveller from an antique land Who said: Two vast and trunkless legs of stone Stand in the desert. Near them, on the sand, Half sunk, a shattered visage lies, whose frown And wrinkled lip, and sneer of cold command Tell that its sculptor well those passions read Which yet survive, stamped on these lifeless things, The hand that mocked them and the heart that fed. And on the pedestal these words appear: "My name is Ozymandias, king of kings: Look on my works, ye Mighty, and despair!" Nothing beside remains. Round the decay Of that colossal wreck, boundless and bare The lone and level sands stretch far away.